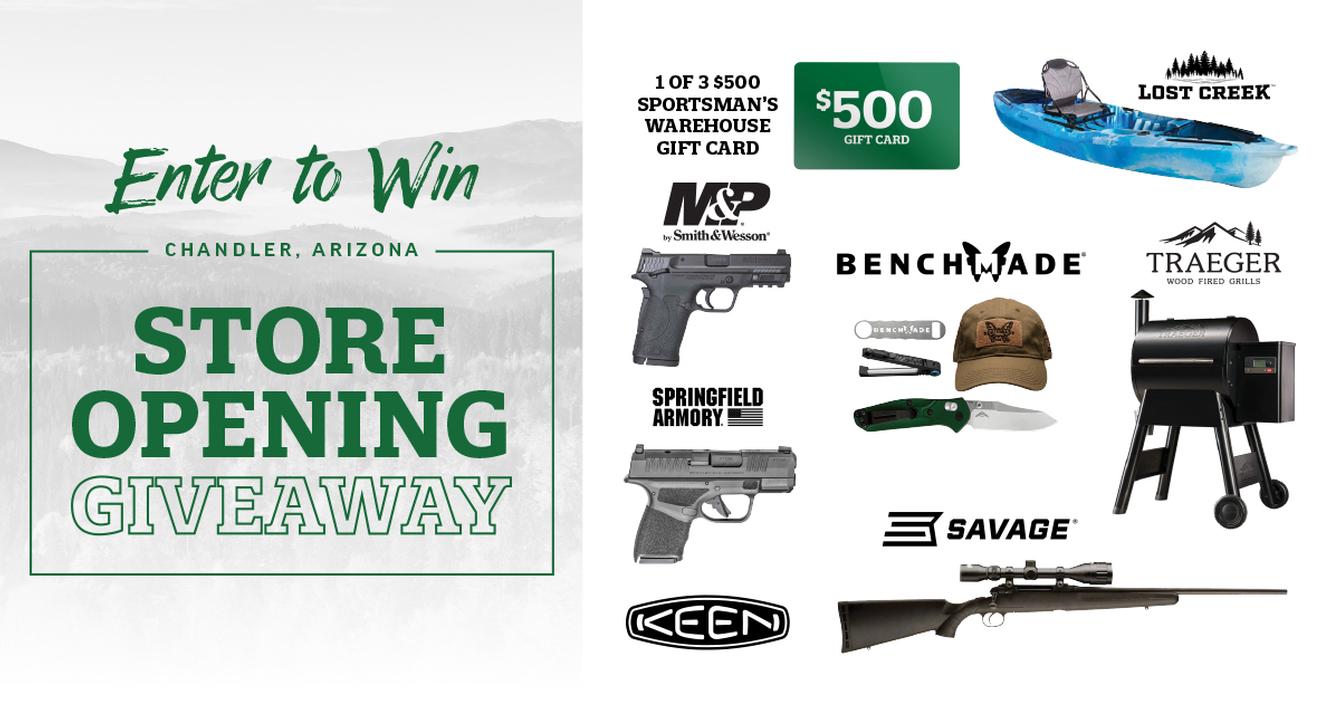 NO PURCHASE OR DONATION NECESSARY TO ENTER OR WIN. A PURCHASE WILL NOT ENHANCE YOUR CHANCES OF WINNING. Odds of winning depend on the number of eligible entries timely received by Sportsmans Warehouse, Inc. (Sponsor). This promotion (the Promotion) is being conducted in connection with the Sponsors retail locations in Chandler, AZ (collectively the Locations) The Locations may also be referenced in these Rules as the Prize Locations.

ELIGIBILITY. Open and offered only to persons who are legal residents of one of the fifty States comprising the United States of America and Washington, D.C, (excluding Florida, Ohio, New York, Rhode Island, Puerto Rico and U.S. Territories) who have reached the age of majority in their state of residence at the time of entry. Subject to all applicable federal and state and local laws and regulations. Void where prohibited by law. Void where otherwise prohibited by law. Employees and directors of Sponsor and its parent entities, subsidiaries and affiliated companies, advertising, promotion, or production agencies, Webmasters and Web suppliers (and their respective IRS dependents, immediate family members and individuals residing in their same household) are not eligible to participate or receive a prize. By participating or accepting a prize, entrants agree to these Official Rules and the decisions of the Sponsor and waive any right to claim ambiguity in the Promotion or these Official Rules.

There is a limit of one (1) entry per customer during the Promotion Period for all Prize Locations. All entries become Sponsors property and will not be returned or acknowledged. Participants who attempt to enter multiple times will be disqualified. Sponsor, its respective parent companies, affiliates, subsidiaries, distributors, participating retailers and advertising and promotion agencies, and all of their respective officers, directors, shareholders, employees, agents and representatives (collectively, "Released Parties") are not responsible for delayed, deleted, damaged, incomplete, misdirected, undeliverable, or destroyed official entries; or for the incorrect or inaccurate entry information, however caused, or by equipment or programming used in this Promotion, printing, human processing or other error or omission; or for any other errors of any kind, whether human, mechanical, electronic or network.

Entries are null and void and will be rejected if not obtained in accordance with these rules and through authorized, legitimate channels or if they contain or reflect printing, typographical, mechanical, or other errors. Should any portion of the Promotion be, in Sponsors sole opinion, compromised by non-authorized human intervention or other causes which, in the sole opinion of the Sponsor, corrupt or impair the administration, security, fairness or proper play, or submission of entries, Sponsor reserves the right at its sole discretion to suspend or terminate the Promotion, and select winners from entries received prior to action taken or as otherwise deemed fair and appropriate by Sponsor.

ODDS: The odds of winning a Prize depend on the number of eligible entries received.

Participants need not be present at Sponsor's retail location to win. The decisions of the Sponsor are final and binding in all matters relating to this Promotion. The Sponsor will attempt to notify the winners by e-mail or by telephone on or before December 06, 2021.

All expenses not specified herein are the sole responsibility of the winner. Expenses which are known and not included but are not limited to: any and all taxes (including, but not limited to, federal income taxes), insurance, licensing, registration fees and costs, and other expenses related to winning or accepting a prize or that may be required for the enjoyment and use of the prize will be the sole responsibility of the winner.

WINNER NOTIFICATION AND DELIVERY OF PRIZES. There will be ten (10) random drawings at each Location during the respective Promotion Periods, held from among all eligible daily entries received during the respective Promotion Periods. Random drawings will be conducted by a representative from the Sponsor whose decisions are final and binding in all respects. If a potential winner fails to respond within 14 days, or if notification is returned as undeliverable, that potential winner will be disqualified and an alternate will be determined. In order to receive a prize, potential winners will be required to complete an Affidavit of Eligibility and Release of Liability which must be signed and returned (along with any other documentation the Sponsor reasonably requires for prize fulfillment, such as, but not limited to, providing proof of identity, various licenses or permits) within fourteen (14) days of notification or the potential winner will be disqualified and an alternate winner will be determined. Prize winners must conform to all local, state and federal regulations as they pertain to qualification for delivery of any Prize and must be able to pass Sponsors requirements for compliance with its obligations as a federally licensed firearms dealer for delivery of a firearm as required by State and Federal law.

No Prize is intended for sale or for Prize distribution in those states or in those areas where the Prize is prohibited by law. Any winner eligible to win a Prize but where the award of the Prize would otherwise be in violation of federal, state, or local law will receive an alternate prize of equal value selected at the sole discretion of the Sponsor. If for any reason whatsoever, a winner is not able to accept a Prize due to reasons such as, but not limited to physical impairment, mental disability, legal restrictions, etc., s/he will receive an alternate prize at Sponsors discretion. State and local laws, restrictions and regulations may limit or prohibit the sale, prize distribution, carry or use of certain prizes. The mention of the Prizes or any other product or service in any advertisement or text does not mean the products or services have been tested, endorsed or approved by Sponsor. Sponsor intends that all Prizes will be awarded within approximately thirty (30) days of winner verification, except in cases of delay or availability. Sponsor is not responsible for such delays. No Prize is redeemable for cash, exchange or transfer, except at Sponsors sole discretion, who reserves the right to substitute any Prize with one of similar or greater value if any Prize, or any portion thereof, is unavailable. Each winner is solely responsible for all taxes on Prize and other expenses (as applicable) not specifically set forth herein, including but not limited to: registration, license fees, insurance, and optional equipment and all other unspecified costs associated with claiming, registering and/or using the corresponding prize. Winners acknowledge the Released Parties (as defined herein) do not make, nor are in any manner responsible for any warranty, representations, expressed or implied, in fact or in law, relative to the quality, conditions, fitness or merchantability of any aspect of any prize, except that prizes will be subject to the corresponding manufacturers stated warranty, if any. Limit: One Prize per Participant.

Any other Prize details will be at the sole discretion of the Sponsor. Winners may not substitute, assign or transfer Prizes, but Sponsor reserves the right to substitute Prize with a prize of equal or greater value should the advertised Prize become unavailable in whole or in part for any reason. For Prizes that are firearms, winners must be able to legally possess a firearm and complete all federal forms and pass all state and federal background checks.

CONDITIONS OF PARTICIPATION. Participants agree (a) to abide by these rules and all decisions of Sponsor which shall be final in all respects relating to this Promotion; (b) that Released Parties will have no liability whatsoever for, and shall be held harmless by participant against any liability for any injuries, losses or damages of any kind to persons, including death, or property resulting in whole or in part, directly or indirectly, from acceptance, possession, misuse or use of any Prize or participation in this Promotion or any Promotion related activity; or for any typographical or other error in the printing, offering or announcement of any Prize via entry forms, posters or any other media; (c) except where legally prohibited, to grant (and agree to confirm that grant in writing) permission for the Released Parties and those acting under their authority to use his/her name, photograph, voice and/or likeness, for advertising, trade and/or publicity purposes without additional compensation in all media now known or hereafter discovered, worldwide and on the Internet, without notice, review or approval; (d) that the Released Parties may collect the personal information submitted by participants, and use the information for sales and marketing purposes, and that participants will be deemed to have opted-in to the e-mail database for Sponsor; (e) that winner will be required to complete, sign, and return an Affidavit of Eligibility and Release of Liability and, where lawful, a Publicity Release before receiving the Prize and that if documents are not returned by winner on a timely basis, or if any Prize notification or Prize is returned as non-deliverable on account of inaccurate or incomplete entry information or otherwise, or if Sponsor is unable to make contact with the winner within seven (7) days of its first attempt, or if winner is found to be ineligible or not in compliance with these Official Rules, such Prize will be forfeited and awarded to an alternate winner, and; (f) Sponsor may disqualify anyone from participating in the Promotion or winning a Prize if, in their sole discretion, they determine that such person is attempting to undermine, tamper with, or abuse any aspect of the Promotion, by cheating, deception or other unfair practices, or intending to annoy, abuse, threaten or harass any other Participant or Sponsor's representatives and Sponsor reserves the right to terminate such participant's eligibility. ANY ATTEMPT TO DELIBERATELY UNDERMINE THE LEGITIMATE OPERATION OF THE PROMOTION MAY BE IN VIOLATION OF CRIMINAL AND CIVIL LAWS AND SHOULD SUCH AN ATTEMPT BE MADE, SPONSOR RESERVES THE RIGHT TO SEEK DAMAGES AND OTHER REMEDIES (INCLUDING ATTORNEYS' FEES) FROM ANY SUCH INDIVIDUAL TO THE FULLEST EXTENT OF THE LAW, INCLUDING CRIMINAL PROSECUTION.

RELEASE. Participants on their behalf, and on behalf of their respective heirs, executors, administrators, legal representatives, successors and assigns (Releasing Parties), release, defend and hold harmless the Released Parties, from any and all actions, causes of action, suits, debts, dues, sums of money, accounts, reckonings, bonds, bills, specialties, covenants, contracts, controversies, agreements, promises, variances, trespasses, lost profits, indirect or direct damages, consequential damages, incidental damages, punitive or exemplary damages, judgments, extent, executions, claims and demands whatsoever, in law, admiralty or equity, whether known or unknown, foreseen or unforeseen, against Released Parties which any one or more of the Releasing Parties ever had, now have or hereafter can, shall or may have which in anyway arise out of or result from Participants participation, acceptance and use or misuse of any Prize or portion of Prize, including property damage, personal injury or death.